While in Cedar Key, we met up with some friends and Mary took pictures of a little robot in the restaurant and while we walked along.  Turns out, the robot was a favorite toy of her grandson and Mary took it with her to send photos to him on her travels.  Mary's little photo traveler was inspiring.

For years I have had a button of Patsy Cline on my travel purse and did a Patsy-inspired collage in Savannah in the past and decided my altered image of Patsy would be a perfect photo traveler.  I found Fabulous Fotoforms online and soon enough my laminated, laser cut lovely Patsy Cline met up with me in Savannah.

In 2018 there was a  show called ''Always Patsy Cline' at the Savannah Theatre, which inspired this collage.  I used Mz Patsy in some other collages as well.

The original Patsy image is from an album cover, I believe, and the microphone stand said 'Grand Old Opry'.
Turns out,  Traveler Patsy gets a bit lost in larger backgrounds, so I've taken to doing little 'set ups' of favorite places. 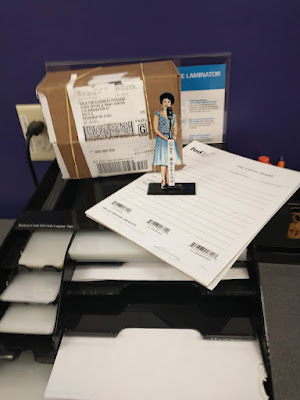