These Tarot-like images have been coming to me for awhile now.  I like how they 'pop' into my head and how they morph as I work on them.   Their names and titles arrive whole or evolve.  And I know there are fuller 'stories' behind them, but they've not really emerged.  But people do share with me the stories they see in the images. I like the sense of communication that seems enmeshed with them.

In that vein, this collage was inspired by Alice.  After I shared the Darklings Series post on Facebook, Alice asked 'Will one of your Darklings be a Keeper of the Crossroads? Crossroads are places of great magic.' Her comment really spoke to me.

Our strong Guardian is accompanied by Feline, Canine and Crow energy at the Crossroad.  Georgia O'Keeffe holds open a portal to Otherwhere.

This first came to me as Compassion and Strength, but then I had a dream of Redwood trees and the particular strength of Endurance arose.

Posted by Altered E Art at 3:16 PM No comments:

The first images came to me while I was watching the Victorian gothic mysterious Penny Dreadful series. I dreamt of dark gowns and then as I began some image searches, the sense that these gowned ladies were holders of energy, held in their symbols and totems came to me.

After I collected some 'dark gowns', the first totem arose - the Bat.  The Bat, so often symbol of the night and mysterious.  But more so a being of extraordinary perception of direction.  So the 'dark' totems became more expansive. As you will see many totem animals arose -Crow, Spider, Snake, Octopi, Lion and in the 'Clan Guardians' - we see Wolf, Panther, Eagle and Bear.

I have been working on these Darklings for several months now.  Some came in quick succession. Others had a waiting time.  A friend likened them to the images on Tarot cards and they do seem to echo those symbolic archetypal images.  Tarot has accompanying interpretations and here the collage titles serves that role;  so if you were to draw 'Minon, Knower of Direction', she could lead you to contemplate, query and associate to direction - needing it, finding it, knowing it is there and so on.

Some of the images offered the main character's name first, the quality being expressed secondly. Others came without a 'name' and only the quality and I have named the images accordingly. Each name came with it's own spelling - some of which are not 'actual' names or spellings; and in one a friend told me the meaning of the name.  So as you can see, this series has been an interesting intuitive and 'allowing' process for me.  I am not sure the Darklings are complete, but decided to share these seven today.

In that, I decided to google the meaning of today's date, August 11, and found this:  August 11th is the day of validation. Individuals born on August 11th express a strong desire to reveal the truth. They also have a predisposition to the dark side of life and places that others are not used to.

Don't you just  love it when the Multiverse seems to be communicating with you?  I do.

Posted by Altered E Art at 3:17 PM No comments:

Ups and Downs and All Around


Some collages emerge because an image catches your eye.  Some are fun.  Others are a place to sort out your feelings.  Still others are a nod to a friend.

This mural is on an nearly abandoned building in Waynesboro, VA.  It was painted by Julia Chon as part of the 2019 Virginia Street Arts Festival

Posted by Altered E Art at 5:28 PM No comments:

When Nothing is Certain, Everything is Possible

Art gives us another window to look through. Creating captures your focus and you enter another stream for awhile.  For myself, 'pushing images' around in digital collage or adding bits and pieces together in mixed-media, lets me move away from the often overwhelming-ness of the world and find a 'breather' in an 'other' world.

Before Covid19, I was working on making embellished versions of some of my collages. I extracted key images and mounted them on foam-core to add dimension and then added a high-glaze finish to each piece.  But when everything changed in March, I just put all creating aside for awhile.  Recently, I re-elooked at the collage and realized it's a perfect message for now.

This is the original collage.

and the dimensional version with  embellished frame 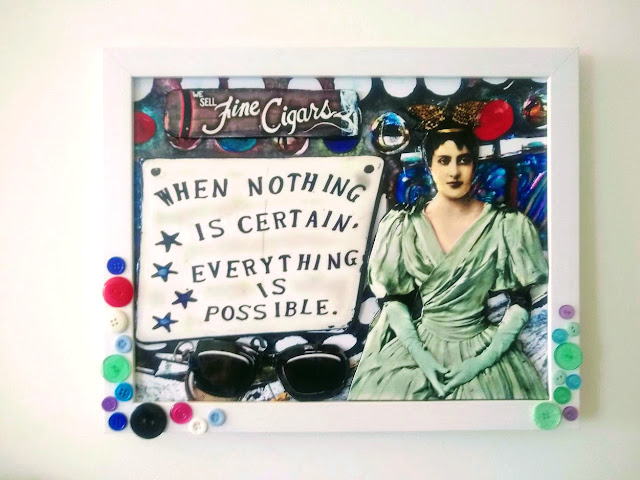 Friends of mine are creating these days as well.  I love this reminder from SVAC - Shenandoah Valley Art Center, of which I am a member.

Check out our current Members Exhibit.

I contributed my Covid 19 pieces and this, Frida Kali Kwan Yin

My dear friend Deb Booth at Different Light Studio found roosters calling to be quilled. Check out the detailed shots of the quilling. 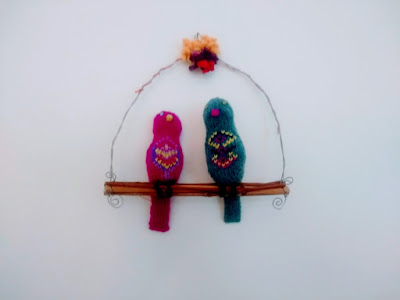 My HeartDaughter Mimi is an amazing craftsperson.  Knitting, quilts, lace, crochet and whatever else catches her fancy.

These magical birds were my birthday gift. The pattern echoes Mexican designs.

And a too cute Snow Bird for her friend Margaret. 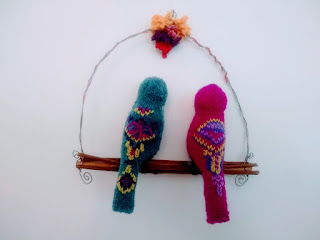 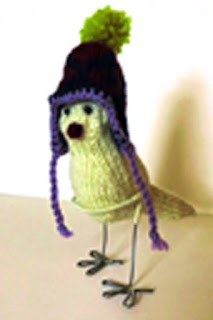 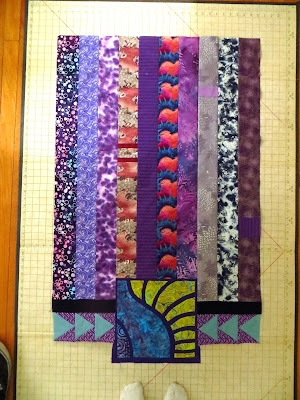 Take care. Stay safe. Be safe for others.
Posted by Altered E Art at 1:53 PM No comments:

In my last post  I shared being inspired by the call from Adobe to create images reflecting our Covid 19 Heroes -https://www.adobe.com/heroes.html.  I was drawn to photos of nurses, many of whom bore the 'scars' of their protective masks and created small portraits.

I was moved to combine them in a single collage and those same faces inspired me to create a mixed-media assemblage. 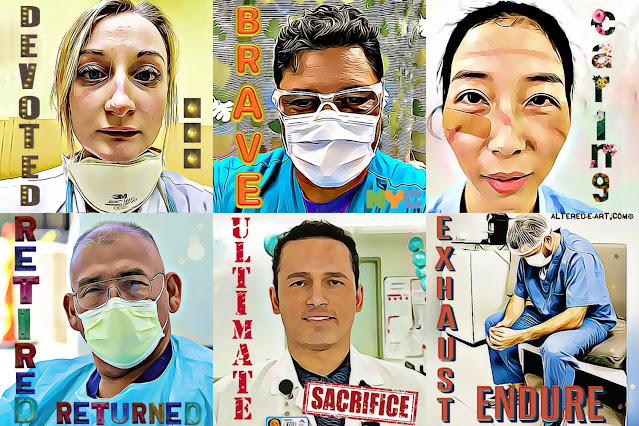 My Covid 19 Heroes Angel carries the faces of these heroes, only one of whom I know by name- Kious Jordan Kelly,  He was a nurse at Mount Sinai Hospital in New York City, gave the ultimate sacrifice. He died from C19 on March 24, 2020. 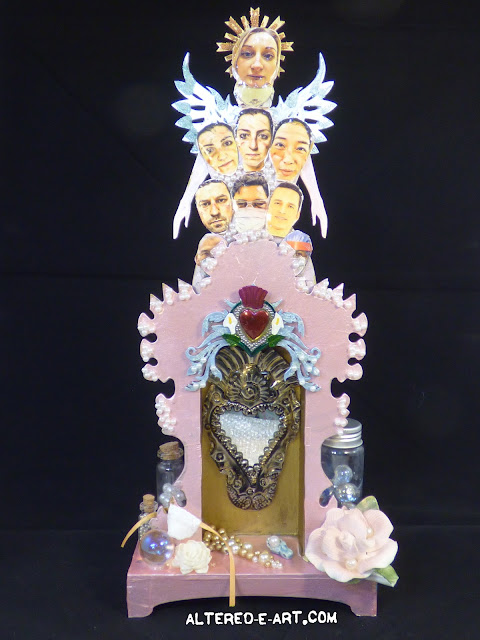 These are small offerings of remembrance,  honoring, sharing heart.


Well, life has truly changed for all of us.  My last post was filled with collage from my Winter Travel.  Now travel is far from my mind, far from a possibility.  And although there is open time for art, a 'having to stay at home and wondering what's next' ennui stymied a creative flow.

Recently, as a user of Photoshop Elements,  I got an email invitation to join their Instagram posts of  #HonorHeroes@Adobe.  It inspired me and I was drawn to do some portraits of nurses throughout the country I found in various articles on the web.  It came to me to highlight their efforts with words capturing the essence of each person.  A tiny tribute. 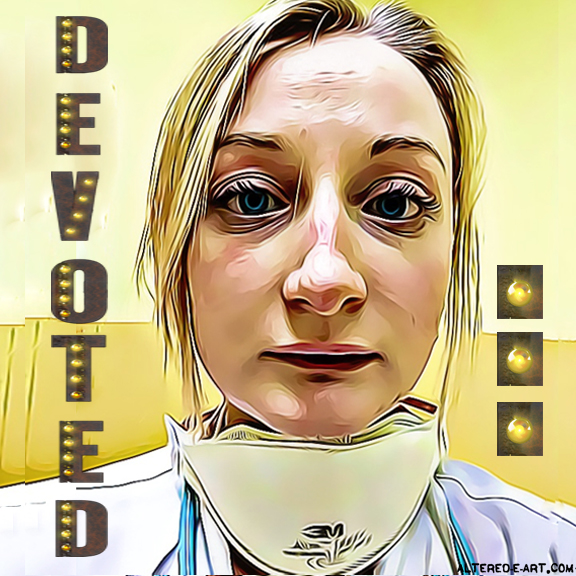 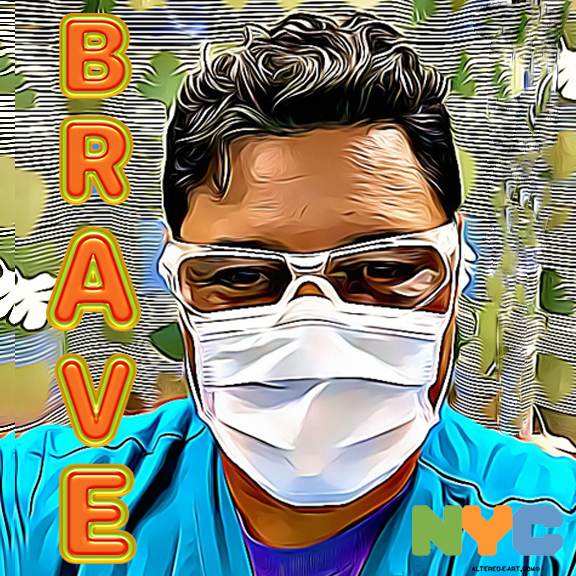 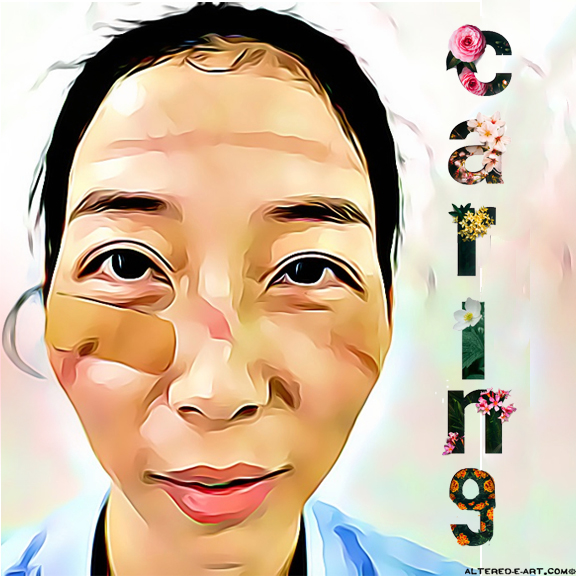 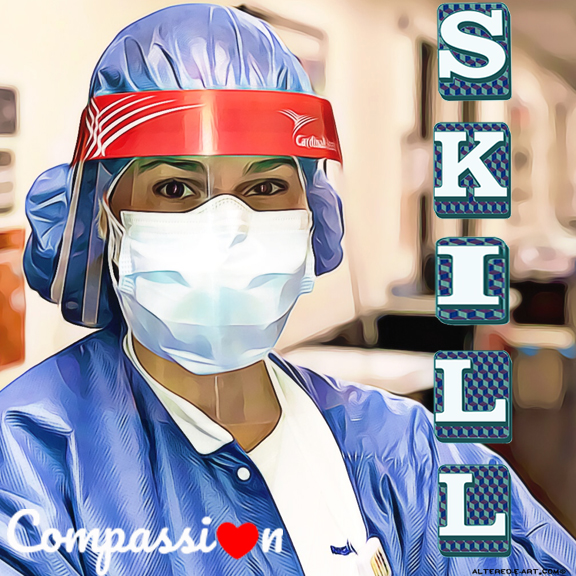 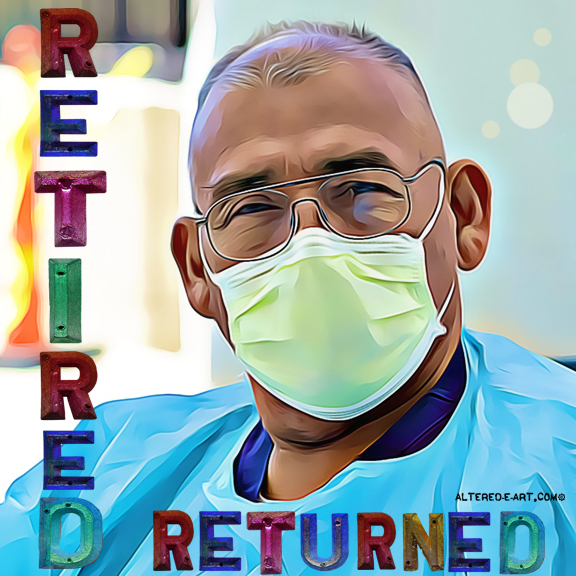 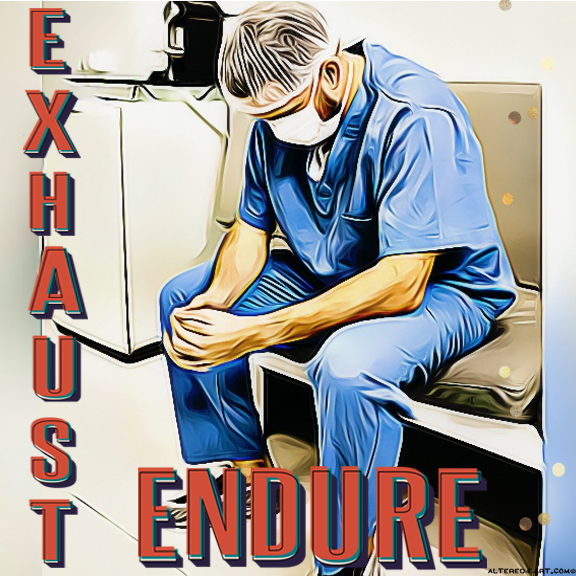 Please meet up with me there @ https://www.instagram.com/altered.e.art/ 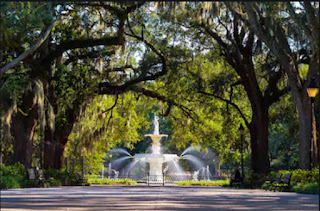 Always so happy to spend time in Savannah. The Historic District and further neighborhoods offer a wonderful combo of urban elegance, historic architecture, funky art, the River walk and the unique opportunity to enjoy a green oasis in its numerous 'Squares', i.e., parks throughout the city, culminating in  Forsyth Park with its many Live Oaks and its lovely, famous fountain.

The presence of SCAD - Savannah College of Art and Design adds a special air of creativity and interesting people to the town. And offers a major museum and various galleries. Savannah's Jepson Art Center and the Telfair Gallery are other rich sources of art. as well as the numerous private galleries all around town. My personal favorite gallery is Roots Up, home for so-called 'outsider art'.

Our daily meanderings offer rich architecture, storefronts and homes, and all the signage and oddities that always catches my eye. And like in Cedar Key, many of my collages from the past six years have become historical artifacts, capturing places that are radically changed or no longer there.

And a final caution I came upon... 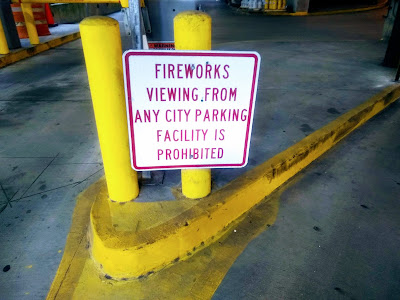 Posted by Altered E Art at 4:15 PM No comments:

Once again I am a most fortunate person to spend some Winter time in one of my favorite places., Cedar Key - laid back, old-school Florida Gulf coast town.  A place to sit and watch and listen to the Gulf of Mexico from our vacation rental deck, meander the streets of historic Florida cottage architecture, with enough restaurants to please and boasting two art galleries.

Our favorite place for breakfast is the Second Street Cafe. Steamers is our go-to place for lunch and dinner. And Island Arts, now on Dock Street, is where we always bring something home from, especially from potter Frank DiGangi.

And once again, I have fun being inspired by what is around me for collage.  As always, I take my own photos, amplify the colors and alter them and add elements that catch my eye, many of which are extracted from other local photographs. The background images may have a bit of artistic modification, so if you came upon that place, it might look different than my collage. I travel with a hefty supply of images and google is always available to find just what I am looking for - or wasn't looking for!  Art fun.

This year I noticed several of my past Cedar Key collages have become 'historical' as some of the places, especially businesses, are no longer there.

The nadir point and the wheel turns 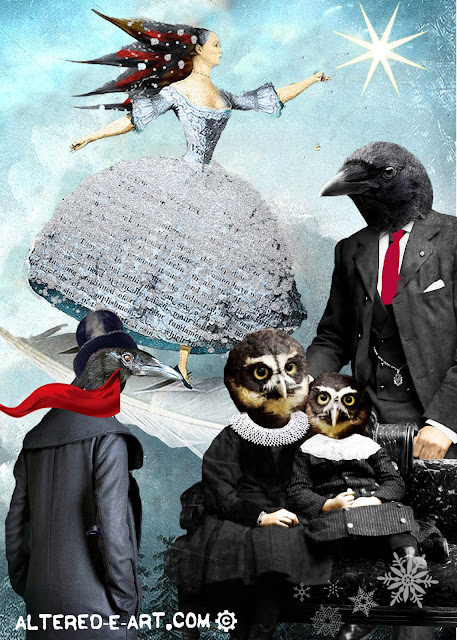