My Savannah time is coming to an end. 2016 was a very stressful year that required a lot of focus and attention and in that, energy for art often went by the wayside.  This Winter travel, which I am most fortunate to have had, really gave me a great infusion of time and energy. I've managed to stay off email and other 'duties' as much as possible  and in that opened space and open mental space, I've had a grand time collage-ing.  The funky island architecture of Cedar Key and the more formal but in their own way, funky, grand buildings of Savannah just speak to me so deeply.

I'd love to say these blue doors are 'haint blue', but I don't really know.  Haint Blue is often found in the South and is related to the Gullah people. The blue is a reminder of water and is said to serve as protection from 'Haints', restless spirits of the dead who, for whatever reason, have not moved from the physical world' and who are afraid of water. Haint Blue is most typically used on windows and doors and porch ceilings.  In any event, I saw these large old blue doors outside an antique shop and they caught my eye.

I looked up and loved the fact that the porches on this house at the corner of Barnard and Charlton streets had framed paintings on the walls. Outdoor porch art-yes! Of course, in my world, art often calls for pie as well.


The Streamliner is a rescued diner, part of SCAD's ongoing renovations projects.  It  is a 1938 classic dining car, originally in New Hampshire, relocated to Savannah in 1990. In 1995, a popular BBQ joint, Sandfly took over the dining operation as a second location, downtown on Barnard Street. Lucky SCAD students can use their dining cards here.

Well, you can't come to Savannah without some reference to 'The Book' or 'The Movie', as the locals call it [so I read anyway] - Midnight in the Garden of Good and Evil, which chronicles the tale of Jim Williams, well known antique dealer and home restorer and his trial for murder.  I have a little tradition of watching the movie while I'm in Savannah. This year I took special note how very much The Lady Chablis steals the show, The blue gown peeking up on the roof is from the famous Cotillion scene in the film.  Sadly, she died of pneumonia last September. 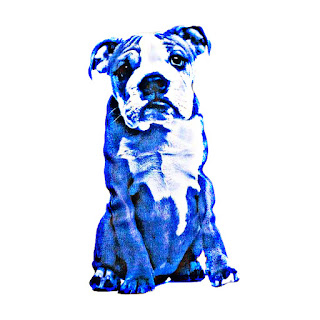 I found among my images a wonderful Bulldog, and I altered him a bit into a Blue Bulldog [why not blue!]  and found I was drawn to use him quite a bit in my Savannah collages.

Later, while watching Midnight In the Garden I discovered a bulldog plays a role - he is Uga the famous University of Georgia football team mascot. I don't know if I subconsciously remembered the bulldog from watching the film before, but it I got a laugh when I discovered I had been using the same motif.