I've been exploring my past.  I was watching American Pickers, a History channel show about finding vintage Americana. One of the pickers mentioned how so many people were searching for the toys of their childhood.  I then had a vivid memory of a little doll I had when I was young in the 50's.  She was called a Ginny doll.  This was a pre-Barbie doll and she was a little-girl type doll.  Most of all, I remembered how I built 'rooms' for her out of old wooden milk-crates.  I papered the walls with wallpaper from an old sample book and made furniture out of scraps of wood and bits of fabric.  My first assemblage work!

I emailed my oldest friend, Jan, and asked her if she had a Ginny doll.  We met when we were 11 & 12, so it was before our own time together, but she said, yes she loved her Ginny. I was definitely going on a Ginny doll hunt.

Naturally, I went to ebay and discovered that there is an entire world of vintage Ginny doll collectors.  I also discovered that I was going to have to pay more $$$ for this little adventure than I had first thought.  But after losing several auctions, I decided having 'my' Ginny was important and that I had to up the ante.  I found dolls that had the look and hairstyle of my own doll.  But still I was bidding too low.

Now you know I collect dolls in a way - bits and pieces I usually use for deconstruction.  I was in my studio and - I'm not making this up! - a doll fell off the shelf at my feet.  She was a little doll I had found some time ago, wearing what seemed to be a homemade dress.  She was too cute, so I never deconstructed her and just put her on the shelf.  Well, you know what's coming - I opened her little dress and saw the Ginny doll trademark and her little shoes were marked Ginny.   I found a sweet vintage outfit on ebay and a cute heart-shaped Ginny doll plastic stand, put a flower in her hair and now another ellipse of life links the past to the present.


More Dolls!  I have been working on a big collage project and when I would just go brain-dead from focusing, I would google images just for fun.  Well, I discovered another, current, world of dolls - the Sonny Angel dolls.  These things are just oddly adorable.  Haven't actually purchased one yet - especially because they have an odd 'blind box' policy, where you pick from a collection but not a specific doll, but their blend of old-school Kewpie and contemporary just tickle me. 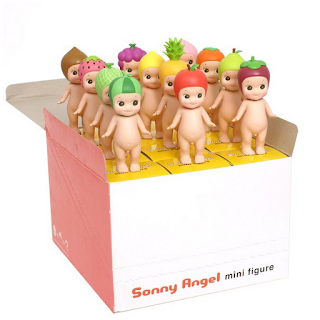 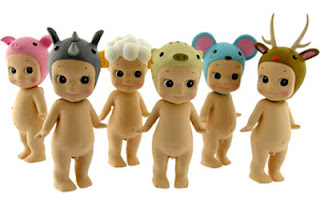 Clker is a great site for small clip art - numbers, letters, signs, symbols etc. and with the ever-valued transparent background! What else is special about Clker is that the site also lets you customize the existing art and upload your own designs if you like.  You can download anything without signing up.  To edit, create a user name - your images are saved in your account and added to the site.  It's all free.

You'll find some really cool fonts at kevinandamanda.com and not just for scrapbooks!  Discovered them on Stumbleupon.