One of the fun things of collage is image collecting.  Images just grab my attention and then sit in the background of my mind.  I find them online and in print, which I then scan into the computer. I then save them as jpegs, then tag and sort them into many categories.  But other times, I just put them into a 'soon' file because they are strongly with me.  And I never quite know where they will end up.  Will they be the focus, an element or in the background?

The barn in this collage is on country road near me,  Route 635.  It always catches my eye, but I only stopped and took a photo of it just recently.  I altered the woman figure, happy in her red cart.  She was in my 'soon' file.  All the elements were happy to 'meet up' at the barn.

Our gallery - Shenandoah Valley Art Center - has a monthly theme and November was Purple. At times, I like to work in the constraint of a theme.  It takes me a direction I might not have gone it.  I recently found the key figure and altered her with purple. Our high fashion gentleman is aligned to a gold and purple sun.  They, too, were in the 'soon' file.  This collage was especially striking in the 11x14 print size.

My friend Jess posted a wonderful picture of her son and his cat.  I always found something quite magical about him and was inspired to put him in an other-worldly setting while still at home.  It seems to suit him perfectly and he was totally in the 'soon' file.

Posted by Altered E Art at 3:57 PM No comments:

These collages were not done in a sequence and yet they do seem to travel well together.

Here I've composed an altered/alternate view of my office/studio The little horse is vintage plaster ware and he is known as Tony the Pony.  My compatriot in this collage is, of course, Frida Kahlo.  I altered her Blue House studio, added one of my favorite paintings to the easel and incorporated one of my favorite Fridas.

Purple Mischief has a All Hallows Eve feel and is perfect for an October post,  but they were just all the odd elements I was attracted to when it was created.  Halloween elements are an all-around vibe in this house.

Golden Age joins the Halloween vibe, and has many dark elements, as it were,  but it too was composed in a season of it's own.

Posted by Altered E Art at 4:12 PM No comments:

I love all things Octo, which I got connected to from my son, who recently reminded me that Cuttlefish are pretty cool too.

My friend Jess, lovely muse, inspires me once again.  I told her I think she has great angles and her selfies really capture them in an 'artsy' way.  She wasn't sure about all that, but is happy to inspire me.

Jess has just opened a new venture to inspire creativity in others too.  Check out her new studio/shop Paint It Orange [orangepaints.com]  in, you got it, Orange, Virginia.

I came across a cache of vintage tattooed ladies. And quite tattooed they are. A world of their own.  All the images were in black and white but a bit of colorizing, amplifying and they are aglow in their true colors.

The large fish background is actually a photo of a feature wall in a restaurant.  The happy goldfish joined the crowd and they are the final images i got from my friends at Mischief Circus.

Posted by Altered E Art at 3:34 PM No comments:

For decades, my sister, Jacqui Rose, felt deeply aligned to the ancient Egyptian goddess, Bastet. The essence of Bastet was symbolic in Jacqui's spiritual practices.

Bastet, also called Bast, is the Egyptian goddess of the home, domesticity, women's secrets, cats, fertility, and childbirth. She was the daughter of the sun god Ra and is associated with the concept of the Eye of Ra (the all-seeing eye) and the Distant Goddess (a female deity who leaves Ra and returns to bring transformation).  Bastet's cult was carried to Italy by the Romans, and traces have been found in Rome, Ostia, Nemi, and Pompeii.  Our own family has Italian heritage.

I began this collage about a month after Jacqui's passing. I wanted to capture Jacqui in her strength and power; her fullness.  The orange tabby alludes to her own cat, Keppie, and I was pleased to find an orange tabby goddess figure. The gray cat alludes to a cat I once had. I think of them as sisters' cats.

And once again, she is in the stars. 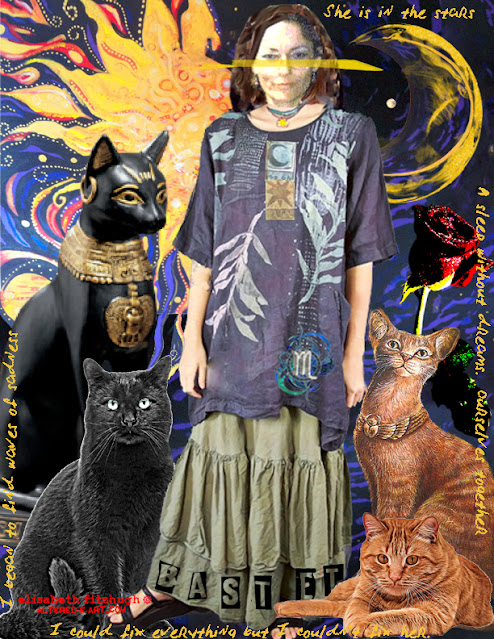 I submitted her in the upcoming 'Artist's Choice' exhibit at SVAC, Shenandoah Valley Art Center.

For many years now, I have found the most wondrous images on a site called Mischief Circus. Always something to inspire, something I hadn't thought of or just the very thing I was looking for.  Additionally, there are fonts, layouts and a myriad of collage-related items.  I feature a link on this site.  But sadly, the Circus in closing it's tent for the very last time. And to say goodbye, they are having a huge sale. The sale ends September 12th, so follow this link - MischiefCircus - to see what's under the tent. 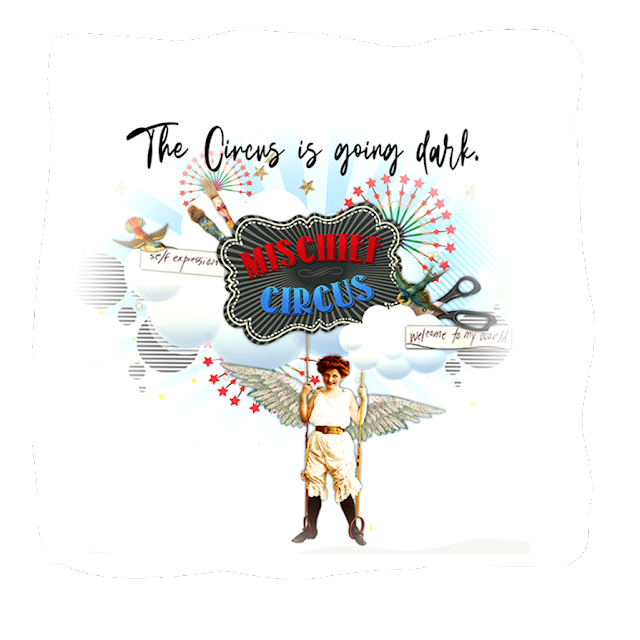 My friend Jess posted a picture of herself in a vintage prom dress.  Captured me totally and she was happy for me to capture her.

This funky 'Antique'-cum-junk store is on a road not close to anything, but when I saw it's great array of varied cement lawn sculptures, I had to stop and take a photo.  The photo's been altered and maybe didn't have quite that many sculptures but there you go.  This one's for Mimi.

The fellow in the white shirt and tie in front of the car, set this one in motion. Naturally, a crowd followed.

Posted by Altered E Art at 2:43 PM No comments:

Retro images - 30's to 50's [my version] and Vintage images - 20's and earlier - just speak to me.  I think it's my heritage of old movies and old photos. But I just find a connection. Of course, I like to alter and amp them and add my usual oddities.

These collages are in the vein of my 'Anonymous Content' work - an image catches my eye and the rest of the collage builds.  For some a title emerges, hence no longer 'anonymous.'  Is there a story to these inspirations?  Not usually. Just evoking a feeling.  If you follow this blog, well, then you know I've shared this all before.  I just love the hours I can spend in these little altered, captured worlds.

The key image here is the pier, which is in Ocean Beach, outside of San Diego.  OB was a favorite get-away place for us for several years.

Our vintage lady pals on the right was the key image. A little color and they were ready to dance. Colorful ladies in the tea cup were nursing school graduates.

The young lad on the left was the first to arrive. Deserts should appear in Collage World often. And they do. 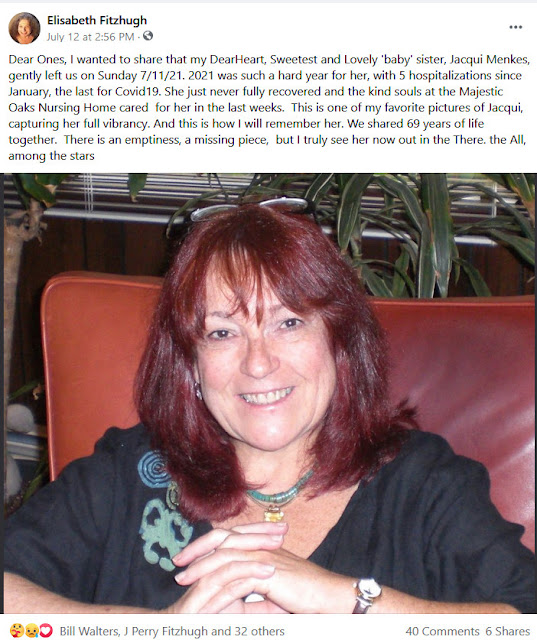 An image gets your attention and off you go.  That key image becomes the anchor of my Anonymous Content collages and the others come into alignment.  These alignments are connected in ways I can't clarify, but they all do like to be together and cohabit their collage space.

Posted by Altered E Art at 5:34 PM No comments:

My mother Rose left us on the last day of February in a leap year.  There was something apropos to her way in the world that she would leave on a day that is out of sequence with the typical. She was incredibly brave at the end; on her own and knowing her body was leaving and that any last minute interventions would be without success. She made a final phone call to my sister Jacqui, saying goodbye and 'don't call 911'. My sister said, 'Mom, you know I can't do that' and she said, 'It's okay, I won't be here when they arrive'. And she was not. She left on her own terms. Recently my dear friend Perry sent me the black and white photo of Rose and I, circa 1976 that inspired this collage.  It was Mom in what I called 'high Fellini' style ~ a turban, big hoop earrings and her ever present dark glasses. A perfect way to remember her.
Others close to me left in a February as well.  Perhaps the nadir point of the year loosens our bonds.  My three friends were all young and left too soon.  Pat and Oscar had illness take them and we got to journey with them a bit to their farewell. Peter went shockingly suddenly from an aneurysm and there was no shared journey, just a fait accompli.  Their passing was hard but their vitality stays with me.
I'm glad I can capture a memory.
Posted by Altered E Art at 4:51 PM No comments:

Valentine and a Bernie

Not withstanding the odd correlation of Love and a martyred saint, it's still fun to have a Hallmark Card day to celebrate love. Love is a good thing indeed.

Had to take a moment and join the crowd

Posted by Altered E Art at 1:26 PM No comments: