All the artwork from the recent art show is still sitting in my studio mostly unpacked  And assemblage was far from my mind.  No art for me this week, I thought.  Then the redoubtable Jerry Boyd -see his own great stuff @ thatjerryboyd.com - posted a wonderful picture of green shoes purportedly belonging to Steve Martin and that sent me on my way. 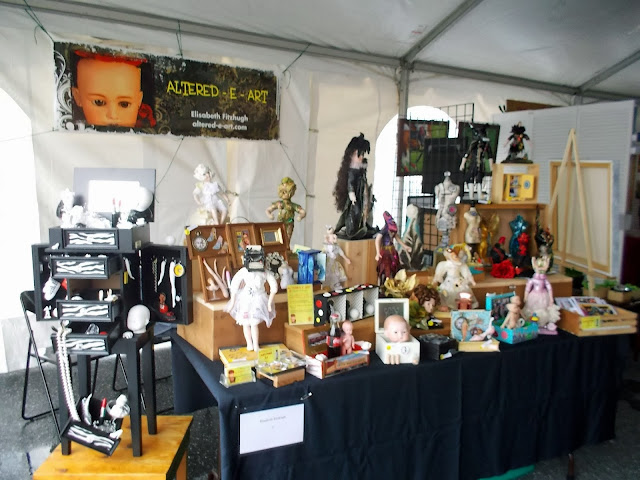 Alas, 2 days of rain really did put a damper [pun intended] on the Art Show, but I'm still glad I did it and I sold a bit and had some really nice experiences. Two of my own favorite artists bought pieces of mine, which delighted me. An old friend who was in town for the weekend, surprised me by stopping by the booth.  She found out about it on Facebook.  All the pieces went to people who really appreciate them.

One guy was really attracted to the altered shoes and said he had to have one but none of them were really speaking to him.  Turns out he has a shoe repair business.  A thought came to me and I took a chance and said, "I have a really weird shoe. Would you like to see it?' and he did and yes, it was perfect for him.  Love that stuff.

The Noir & Blanc etagere got a lot of attention, including a woman who owned one as a jewelry box.  I noticed the kid reactions.  Girls seemed to like the art and boys said 'it was a little bit creepy'.  Maybe girls zoned in on the doll parts and boys zoned in on that they were, indeed, parts.

Mz Underwood also garnered a lot of comment.  Nora and I observed that people were drawn to the pieces that had more literal parts - like a typewriter or a radio for a head.

Also, cards of my collages sold well, so that was nice feedback. The director of my gallery told me she wanted me to put work in the gift shop and a shop owner in nearby Staunton would like some pieces on consignment, so that was fun too. Several people told me that my stuff really needed to be in an urban environment, which I know, but again, fun to hear it from others.

As ever, many many thanks to Nora and Deb for their support and encouragement.


These are some of the characters who have new homes -


Earlier in the day, I bought this from the guy who bought Edgar.  I can see this he would totally appreciate Edgar. 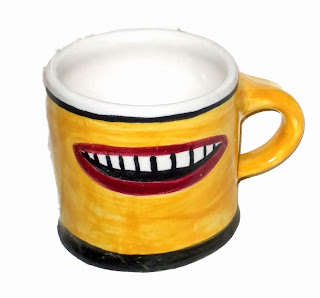 Thanks to Piper Groves at the Shenandoah Valley Art Center for coordinating the event so well and for offering us Emerging and Local Artists the opportunity to easily participate. 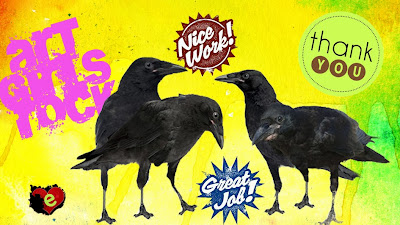 Posted by Altered E Art at 5:34 PM No comments:

Come on by!!  Art, Music and food.  Fun in the Shenandoah Valley.

All About the Fall Foliage Art Show - video

Posted by Altered E Art at 4:38 PM No comments: